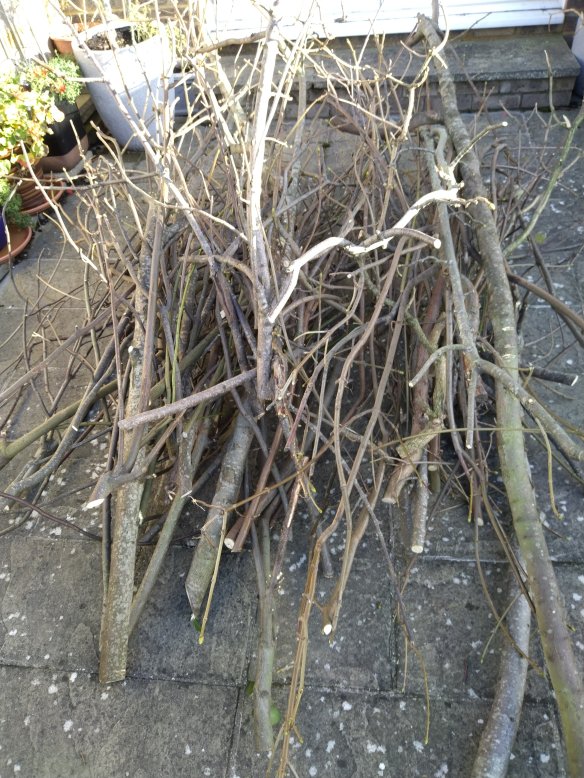 OK, some of these are quite large for sticks, but I’ve been able to do some tree cutting and have collected quite a bit of wood that can be cut and dried for use either next year or even futher ahead. Once dried out these will be able to go on the firepits featured earlier in the year. In terms of quantity (having already cut it up) I’ve got about six average sized truggs worth of wood here so not a bad haul and not a bad day’s work in the garden. 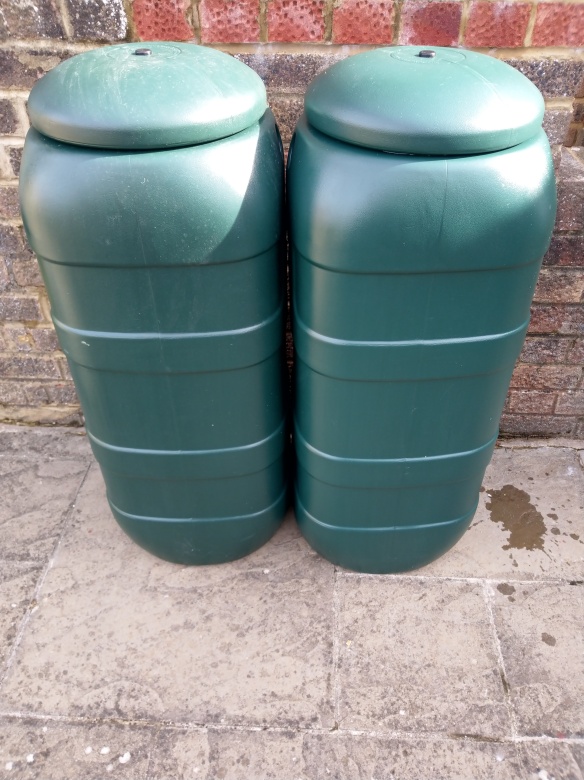 With the very dry summer we had this year and the speed at which the waterbutts I have ran out of water, I took the opportunity of getting a couple more. They are smaller than the two I already have, but will fit into the garden in an out of site location nicely. I also managed to double up on points with a special web offer that earnt me twice as many air miles as normal. They will be connected together and to a gutter filling waterbutt so it will be all free water as well, hopefully recovering the expense from the sprinkler this year. 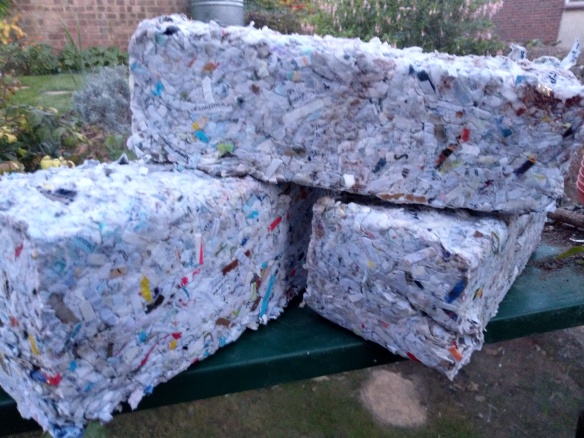 I’ve had a couple of buckets of shredded bills and other items soaking for a while now and it’s time to turn these into something that serves a purpose. I have a paper brick maker that I use to make bricks from old bills etc. They then get dried in the greenhouse and used as fuel for fires. They will burn for about 2 hours which isn’t too bad. Personally I quite like the fact that I’m send my old bills up in flames in a quite literal way. I’ve got quite a few now, but they get used on a number of occasions throughout the year and its quite possible that some will still get used this year as well. 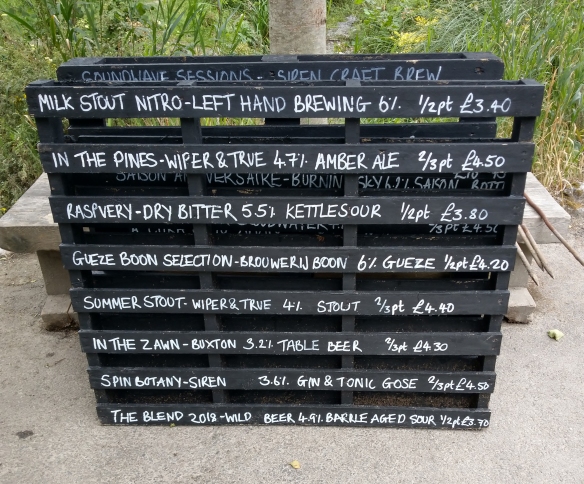 I decided to do a different walk to the one I had planned and decided to extend out a favourite route of mine and try some new paths that went off of it and incorporate some older paths that I hadn’t walked for quite some time. One of the country pubs that I went past had discovered what some might consider the best being of recycling going, using the old pallet to let those passing know what guest beers, ciders and stouts they were serving. Sadly this was very early on my walk, but I may be tempted to pop back another day when its on the way home instead. 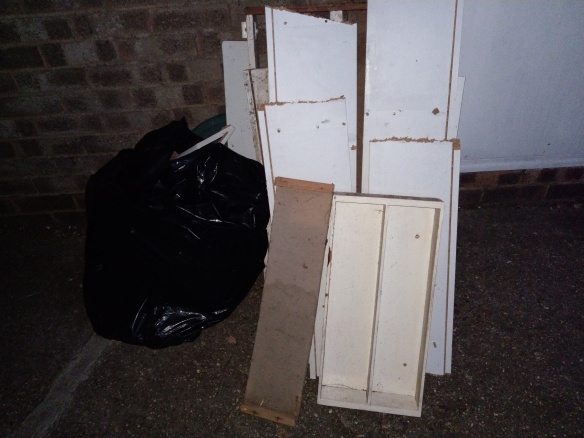 Having successfully put up 3 sets of shelves, I couldn’t put up the remaining 3 sets without taking down or removing long standing shelving options that were either of no real use or reaching the end of their usable lifespan. There were a number of small 3 inch deep shelf units which came down in favour of shelves that were about 15 inches deep. Out came a very old bookcase (probably about 20 years old) that was falling apart in a number of areas, but given how old it was I feel I’ve had value for money from it. There was also a fibreboard shelf attached to the crossbeams of the garage. I’ve no idea what that was for unless it was to hide things from people who wouldn’t be looking very closely. It will all go to the recycling depot later in the week so even though it has no purpose now, its current situation may not be final. 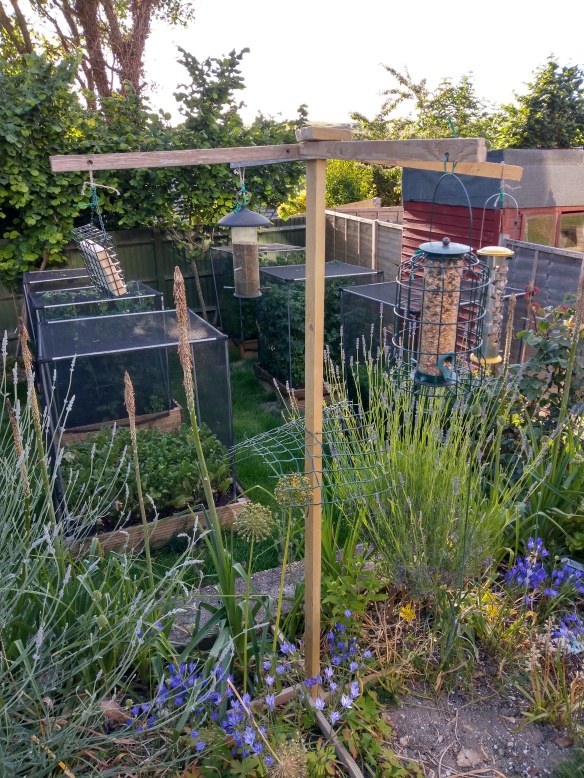 With the weather as nice as it has been the last few weeks I’ve managed to get a lot of garden stuff completed, but there was one project that had left me scratching my head for a while, and it was that of how to have the bird feeders out but not dominated by the squirrels. I therefore decided to experiment. I put together this rather rough bird feeding station with the sole intention of seeing if the hard plastic netting half way down would provide a block (or baffle as they are known) to the squirrels. Its done entirely with left over wood from other projects and is not permanent. If the project works, then I’ll either find a nice feeding station to buy or will make a better version of this one. 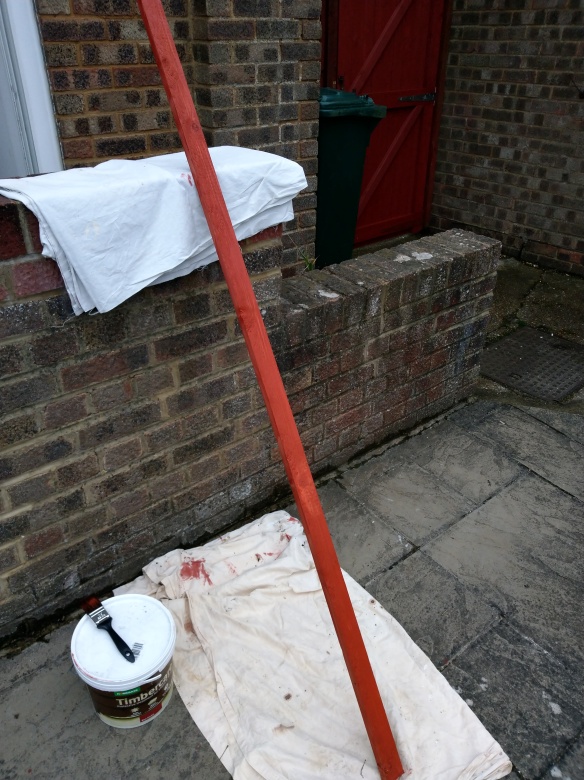 The new garden gate is working excellently but I have noticed that one of the strips of wood on that stopped the gate swinging forward in the wrong direction without damaging the latch was a little thin and there was a big gap in places. Having a supply of wood left over from previous purchases I found one that was much better quality and also was narrow enough for the gate to still close properly, but also wide enough to fill the gap. Today I was treating it to preserve it and have it match the colour of the gate. Once it’s dry I’ll remove the old and nail into place this replacement 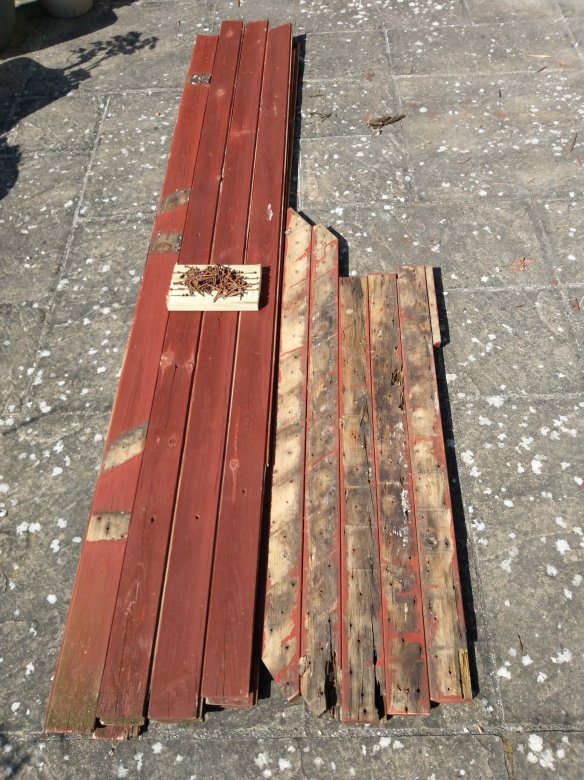 While taking out the bins for collection the other day I noticed that my garden gate was starting to have issues with it’s integrity. It wasn’t totally falling apart and would have probably lasted a bit longer, but as I had the time and the weather was going to be good I decided today would be a good time to replace it. The previous gate had been a part DIY gate. A sort of flat pack gate if you like. Above you can see all the pieces that made it up. Panels that had to be linked together, nailed to a series of crossbeam which were also screwed into place. You could even decide to have a flat or curved top to it as the beams were purposefully over-long. I needed to take it apart so it can be recycled at a later day. The replacement is a pre-built gate which works well, and as someone I know would say, fills a hole! 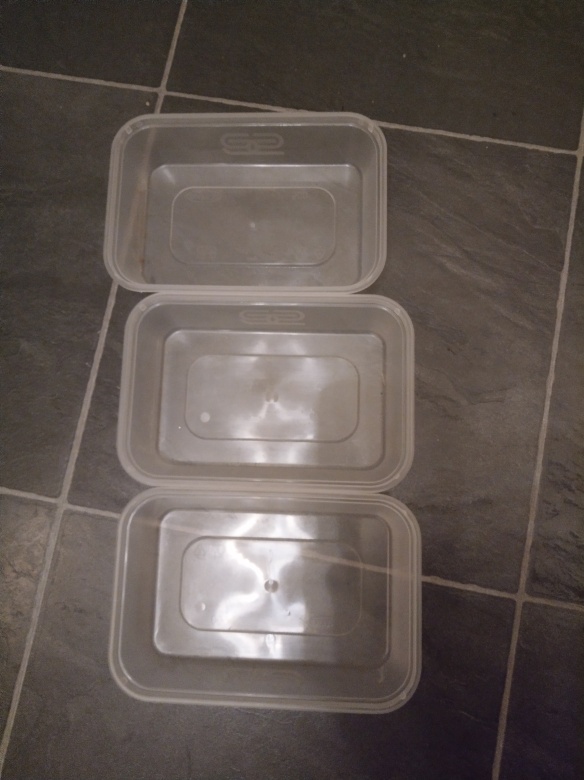 I’ve mentioned before that there is a group of friends I regularly spend time with and we alternate what we get up to on a very loose basis. One thing that we hadn’t done for quite a while was have a Chinese takeaway. This was mainly due to a terrible experience that had soured the evening we were having. I had ventured that we try again with a different ‘supplier’. One of the bonuses for me if the restaurant provides the meal in plastic tubs, I will normally take them home and then reuse them numerous times. Happily the new restaurant used didn’t disappoint so I suspect that we’ll be heading back there again at some point in the future. 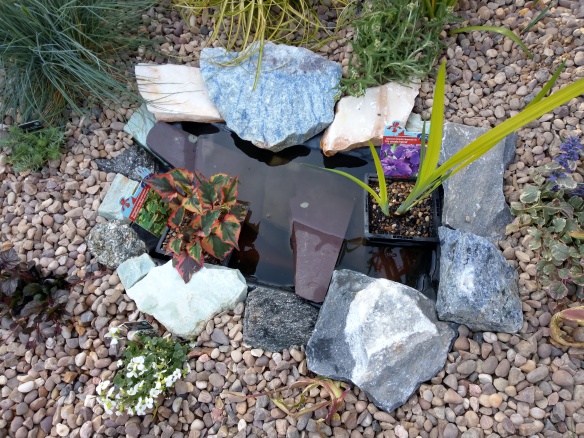 I’ve managed to finish off the micro-pond. Having not found any decorative stones that were of use in the garden or in any gardening stores, I opted for the same option as the stones around the edge that were already in place. Fortunately the local aquatic centre I went to had an offer on these sorts of stones so it wasn’t expensive to finish off. Hopefully you can agree that it looks nice and a long way off of the plastic shopping crate that it started off as.